Window of opportunity: Costing the benefits of bushfire design

As time passes since Australia’s Black Summer, Black Saturday, and the introduction of Bushfire Attack Level (BAL) ratings, many people are still grappling with this aspect of the building regulations. Building designer Dick Clarke unpacks his experiences with the standard, and suggests ways to improve its workability.

Australia has a long relationship with fire. Much of the country’s most iconic flora can survive fire and many species use it to assist in reproduction and germination. Aboriginal people have used fire for at least 60,000 years as a land management and farming tool, in the same way as European-style farming uses fences and ploughs. (1)

Evidence shows that pre-1788, regular cool burns were used to produce a variety of responses from the pastures and forests, allowing grain harvests and more effective selective hunting. This approach ensured any wildfires had a short run of uncontrolled fuel and were thus easily managed.

Colonisation disrupted this system, and climate change is disrupting it further. Without expert management, bushland grows dense and wild and when fires occur in this changed landscape they have open slather on vast swathes of country and quickly become mega-fires. Mega-fire events are usually labelled a ‘black’ day, and records of these events can be traced back to the early 20th century, but not earlier. And unfortunately, with the effects of climate change, the trend globally is towards greater fire risk and more extreme fire events into the future, as the summer of 2019-20 has proved. (2)

The Black Saturday fires in Victoria were especially deadly and stopped the nation in its tracks: 173 people lost their lives and over 2100 homes were destroyed. The political and community response to the horror of Black Saturday sparked a Royal Commission – and with thousands of people directly and indirectly affected, it also focused public attention on the standards required for construction in bushfire-prone areas.

The Black Summer fire season ran from June 2019 to May 2020, an unprecedented period with megafires that razed over 18 million hectares of land, much of it forest and wildlife habitat, and whole villages were lost. Around 9,000 structures were destroyed at a total cost of over a $100 billion, while 34 people died in the fires, and a further 445 died as a result of fire-induced complications.

Once again the powers that be sat up and took some notice, with state–based inquiries and one national Royal Commission. While state governments openly attributed a lot of the cause to climate change, the Federal government remained steadfast in its refusal to act on the advice of hundreds of experts, leaving many of us wondering how such dissonance could be so blatantly defended by those holding public office. 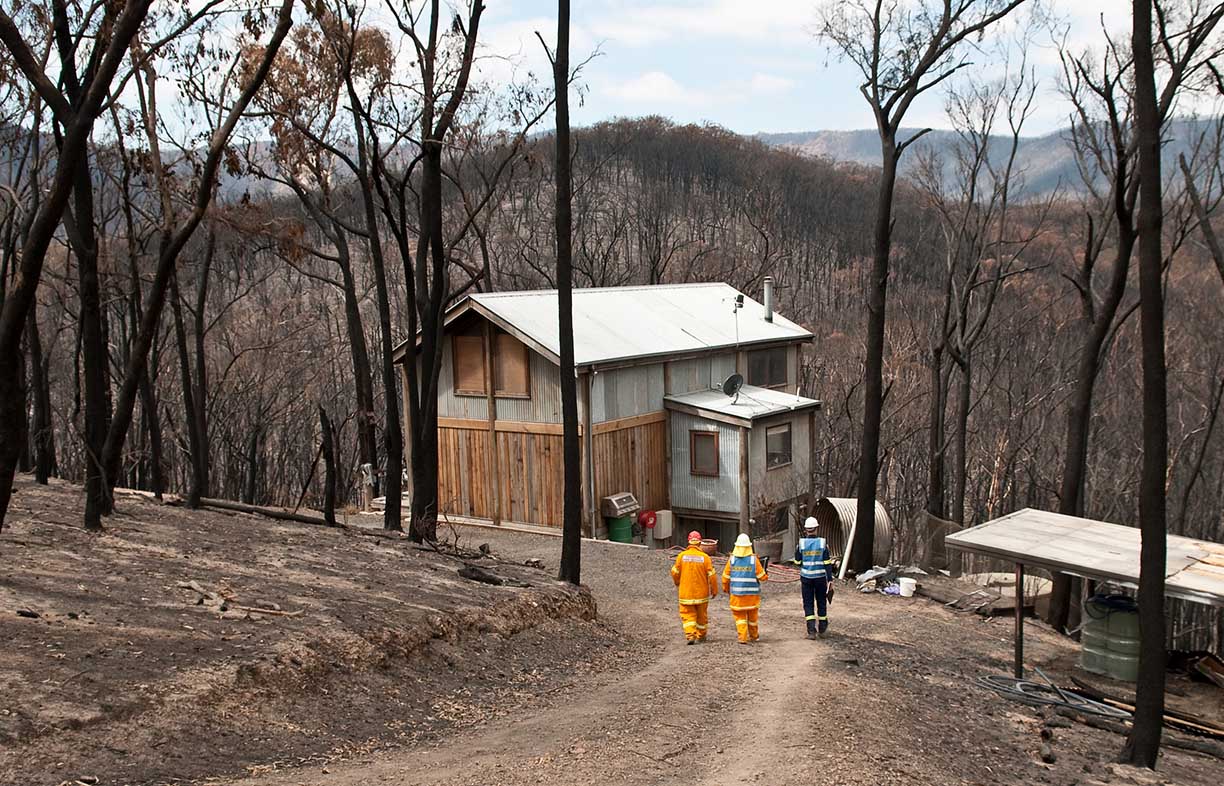 Back in 2009, at the time of Black Saturday, a review of Australian Standard 3959-1999 Construction of buildings in bushfire–prone areas was underway. The old standard had well-documented problems, and a wholly new regime based on a Bushfire Attack Level, or BAL rating, was already percolating through the bureaucracy.

The BAL approach represented a complete overhaul of the existing framework for building in fire-risk regions, which had been based on CSIRO research. To establish a site’s BAL rating, land was surveyed by the various state authorities and classified as ‘bushfire prone’ or not, with the exception of most farmland. The ratings range from BAL-Low, where the risk is considered nominal, up through various radiant heat loadings BAL-12.5, 19, 29 and 40, to the highest hazard being FZ, Flame Zone. The radiant heat number is estimated in kilowatts per square metre (kW/m2), at various prescribed separation distances, with Flame Zone assuming that exposure is above 40kW/m2.

The assessment is mostly required to be done by a consultant accredited with the Bushfire Planning and Design (BPAD) Accreditation Scheme, administered by Fire Protection Association Australia (FPAA). Some local governments allow self-assessment, but they will check the assessment with a (hopefully) qualified officer. The methodology is outlined quite rigidly in AS 3959-2018, with little scope for interpretation. 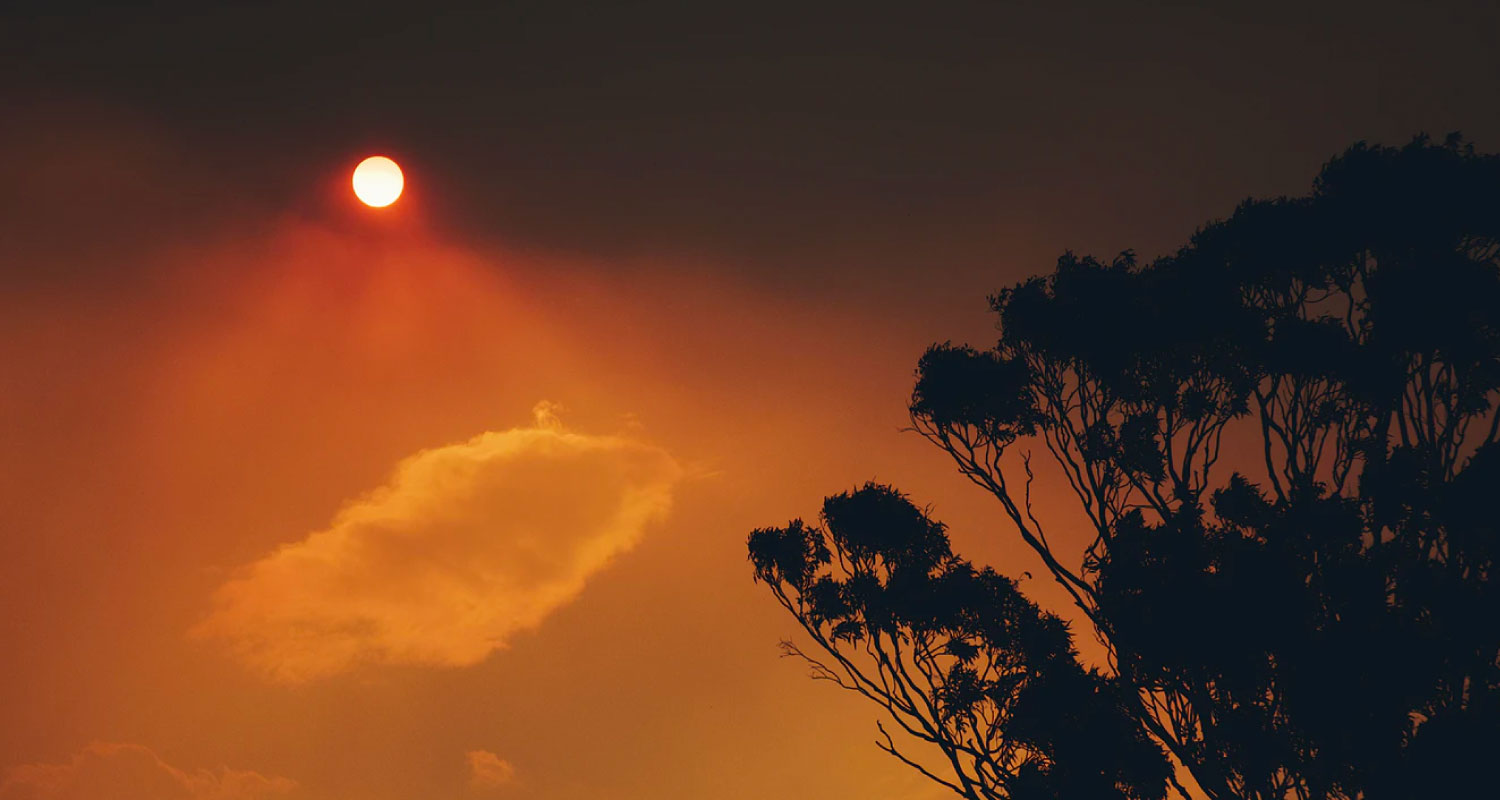 BAL: Know Your Level of Risk 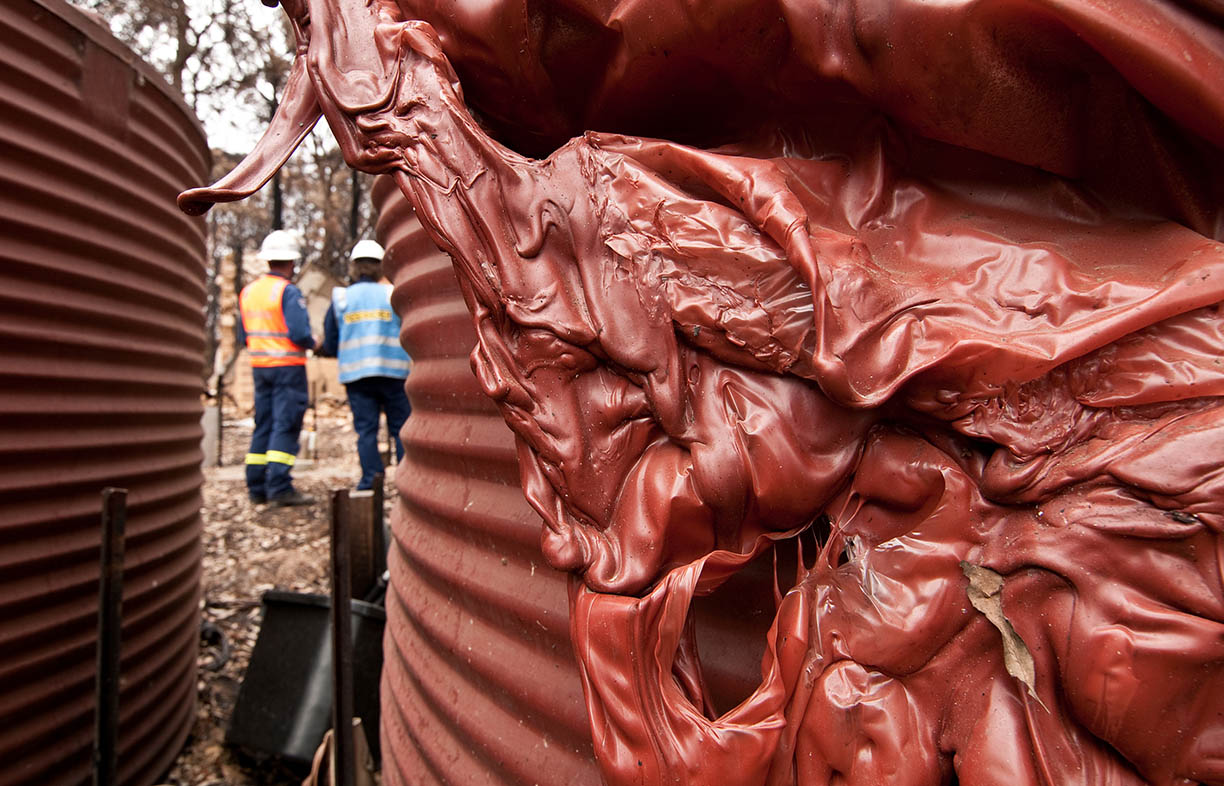 Fire has always been part of the Australian landscape, but due to climate change bushfire seasons are lengthening and bushfire events are becoming more frequent and intense.

The experience on the ground is that the impact of the standard has been huge – especially if we consider ‘design’ in a holistic sense, including budget, landscape and building systems. However, it possibly has not had such an obvious effect on the form and aesthetics of bushfire-prone buildings, when it probably should have – such as a stronger emphasis on earth-covered homes, which nearly always survive bushfires due to the lack of conventional roof structures.

It’s all about the glazing! Well, almost all. Because glass is at greatest risk of breakage in extreme heat, windows and external doors are where most effort is applied – just as it is with thermal performance. When glass is heated quickly, it undergoes internal stresses that can cause fracture.

In aluminium frames, rubber seals can soften and fail. Equally risky is flying debris in the gale-force winds that accompany a fire front. The BAL ratings treat glazing with increasing stringency, such that BAL-FZ requires that the whole unit (frame and glass and all the bits in between) have a fire resistance level equivalent to 30 minutes of exposure to fire (notated as -/30/-). Or, unrated windows can be protected by fire-rated shutters. In NSW this ruling changed in 2017, where BAL-FZ ratings could previously be met by using BAL-40 windows behind a ‘non-combustible’ shutter.

Incorporating shutters into a building design is not for the faint-hearted. They cannot be just ‘added on’ at the end of a design process but should be part of the conceptual design from the earliest point. This means that an initial BAL risk assessment is required before there is a design for the consultant to speak to. Sometimes shutters can be used to provide extra controllable shading, but they are heavy, so the control system also needs to be robust and user-friendly.

A practical issue with FZ-rated windows is that there are a relatively small number of companies with commercially available products that meet the required standard and are suitable for residential use, and these are prohibitively expensive for most. One modest house in the Blue Mountains near Sydney faced a cost for windows and doors that increased from about $60,000 for BAL-40 windows to nearly $300,000 for BAL-FZ. Needless to say, the young couple’s dreams were shattered and they sold the land. It can be argued that it’s better to shatter their dreams now than for them to be casualties of the next fire, but until more testing is undertaken on permissible glazing, we don’t yet have certainty that the $300,000 spend would achieve the intended level of safety anyway. Which takes us to choice and the urgent need for a greater number of permissible window options available through the standard.

Why BAL-FZ glazing can be a showstopper

In practice, the low BAL ratings, from BAL-Low through 12.5, 19 and 29, cause little grief to design or budget. They are mostly about keeping embers out of the building and its cavities, and some constraints on flammable materials. This is common sense, as ember showers can extend many kilometres beyond the fire front. This was the cause of so many losses in the suburban streets of Canberra in 2003 where it was embers that caused most houses to burn, not direct flame contact. A house we designed at Laguna was destroyed in late 2019 during the Gospers Mountain Fire, most likely to embers. You can read find out more in the article Analysis of Bushfire Loss, published in Sanctuary 50.

A BAL-40 rating is a bit harder to achieve, with controls around glass type and thickness, rubber glazing seals and other materials potentially susceptible to failure in the extreme heat. Again, the application of the standard is sensible and the cost to comply with the requirements has not proven to be an issue for many.

However, BAL-FZ (flame zone) is another matter altogether. The equivalent of a 30-minute fire rating where flame is applied directly to the building material or element, and whatever other damage that element may suffer, it must not ignite or pass sufficient heat through to any other connected element or the interior that would allow ignition to occur. This is not so bad for solid elements like floors, walls and roofs. But it is a big ask for glazed elements – windows and doors.

The bushfire construction standard nominates the fire test (AS1530.8) as the performance requirement for a shutter or window or glazed door. It requires either an FZ-rated shutter over un-rated (standard) glazing, or FZ-rated glazing and frame (together, along with all hardware and seals), plus they need to withstand extreme winds that come with fire weather.

Although we’ve found the restrictions on skylights are easily worked around with virtual photovoltaic-powered LED skylights such as those made by RediLite, other strategies like reducing the expanses of glazing to save on cost can only be taken so far without severely restricting solar gain (for passive heating) and natural daylighting. And frustratingly, a 50 per cent reduction in glazing area does not result in a commensurate cost reduction.

The South Coast Container House is rated BAL-29. Built with shipping containers, the container doors have been left on their hinges and can be closed to protect the glazing from bushfire, and angled to allow direct sunlight into the house in winter or to shade the windows in the heat of summer. 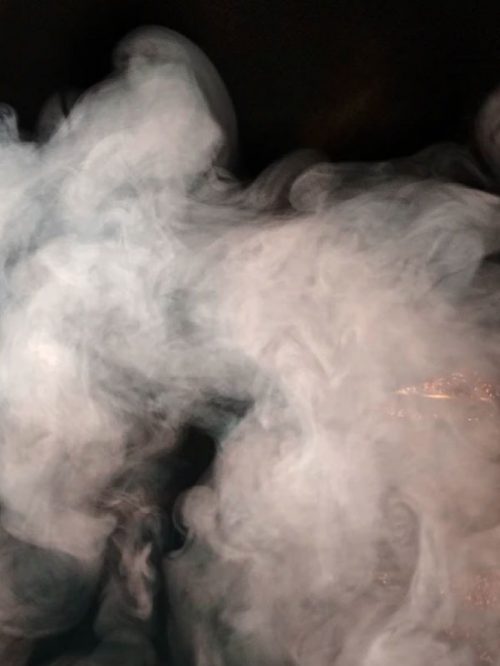 Where there’s smoke: Protecting yourself from air pollution at home 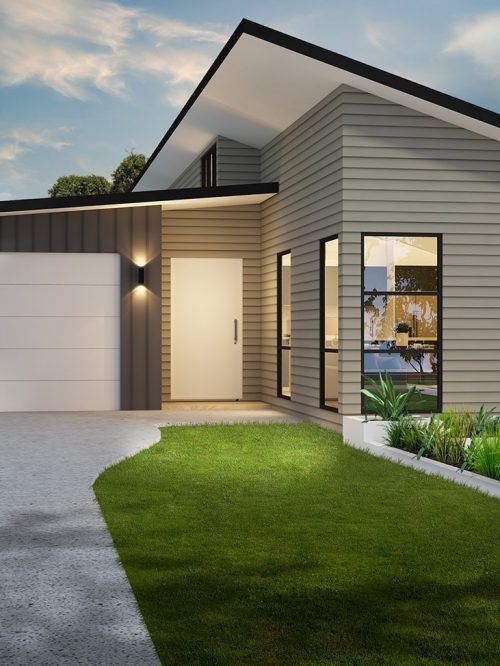 Why airtightness matters  for bushfire resistance 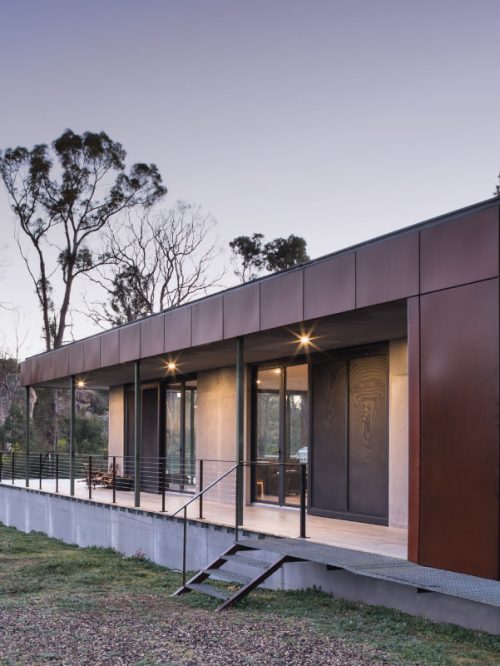 Why site planning is so important for future bushfire resistance 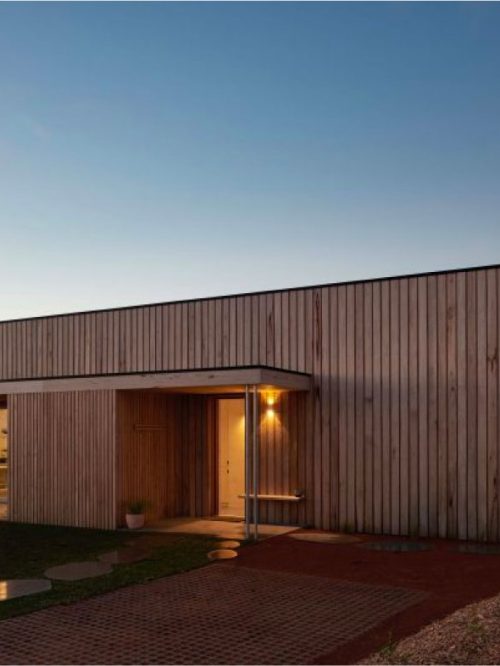